Will This Upset Him? Camila Cabello Posts Photo Of Shawn Mendes Braiding Her Hair 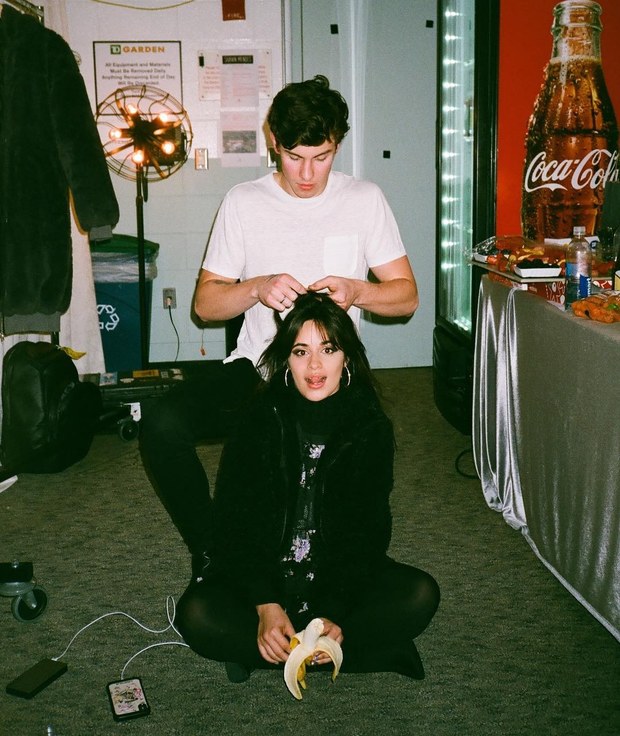 Camila Cabello uploaded the following photo with Shawn Mendes on Instagram earlier on Sunday (Dec. 9). It was most likely taken backstage at some Jingle Ball concert they both performed at this weekend in the U.S. The photo shows the “In My Blood” singer braiding Camila’s hair as she sits on the floor of her dressing room. Is there something bad about this photo? NOTHING. But will the public sharing of this photo make Shawn Mendes upset? Yes. I'm 100% positive. Why? It all takes us to what he told Rolling Stone magazine.

Speaking on how mortified he felt about “fans” trying to turn certain things he would do into “proof” of him being gay:

“Swift was texting Mendes a cellphone video of them together, just to make sure he was cool with her posting it — a short clip of the night they were hanging out backstage at her Reputation tour and she put her glittery eye makeup on Mendes’ face, to his delight. He told her it was fine without thinking, but later that night, he woke up in a cold sweat. “I felt sick,” he said. “I was like, ‘Fuck, why did I let her post that?’ I just fed the fire that I’m terrified of.””

So if he felt like he f-cked up by allowing Taylor Swift to share that clip of her applying glitter on his face, as that would fuel the gay rumors according to him, then I'm confident he is going to feel like crap again when he sees Camila posted this specific picture... without his consent? That I don't know. But in view of his words on Rolling Stone, then I must assume Camila didn't ask him. And if he’s coherent with his words (he unfortunately confirmed he feels insecure with these adorable moments being "misinterpreted" by some people, aka. bullies), he should feel really upset right now because indeed this photo has fueled the rumors again and horrible comments are being spread online as I type this article. Take a look:

is he worried people will see this and think he's gay! boys dont do girls hair

Camila Cabello and a gay friend

Your hairdresser is gay.

On a brighter note, both Camila and Shawn are nominated for the 2019 Grammys.