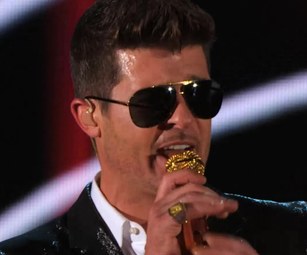 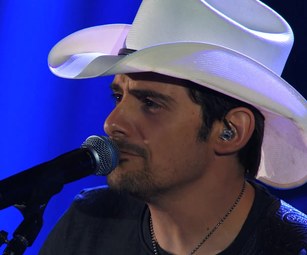 Robin Thicke and Brad Paisley were the guest performers on the latest results show of NBC's 'America's Got Talent' - currently in its 8th season - on Wednesday, July 31. The blue-eyed crooner performed - sans Pharrell - his worldwide smash hit "Blurred Lines", while country star Brad Paisley sang his moving ballad "I Can't Change The World".

Not having Pharrell on stage really brings the 'magic' in the "Blurred Lines" performances a tad down, but Robin still delivered a great show. "Blurred Lines" is the #1 song in the planet, and the first single (and title track) from the 36-year-old Californian's sixth studio album, which got released this week in the US. HitsDailyDouble.com, according to first-day sales reports, estimates "Blurred Lines" (the album) will sell around 130-140k copies in its debut week securing the #1 spot on the Billboard Top 200 Chart.

Country singer Brad Paisley also hit the stage of 'Got Talent'. The 40-year-old West Virginia native treated the audience in the studio and the NBC viewers at home with the debut live performance of "I Can't Change The World", a country ballad from his ninth studio album "Wheelhouse", released last April. Pretty song.