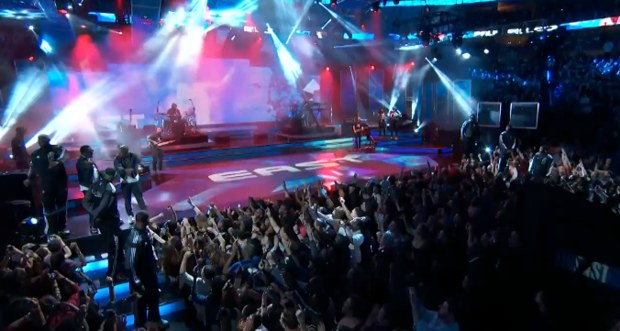 Pharrell's catalog of hits run deep and he showcased that tonight with his performance at the 63rd annual NBA All-Star Game in New Orleans. The Virginia musician took the stage at the Smoothie King Center right before the start of the game to help introduce players from both teams

The focus wasn't solely on Pharrell as he brought out several guests throughout the performance. First up was Nelly who came out for a brief moment to perform his The Neptunes-produced throwback hit 'Hot In Herre'. Diddy and Busta Rhymes followed shortly after and received a loud reaction from the crowd with a live rendition of 'Pass the Courvoisier, Part II'. Once players from the Eastern squad were introduced, Snoop Dogg appeared on stage for a performance of his 2003 single 'Beautiful'. Pharrell closed out the introductions doing a medley of 'Get Lucky' and his most recent Billboard smash 'Happy'.

Watch Pharrell and friends perform at the 2014 NBA All-Star Game below. Enjoy Diddy's dancing at the end.