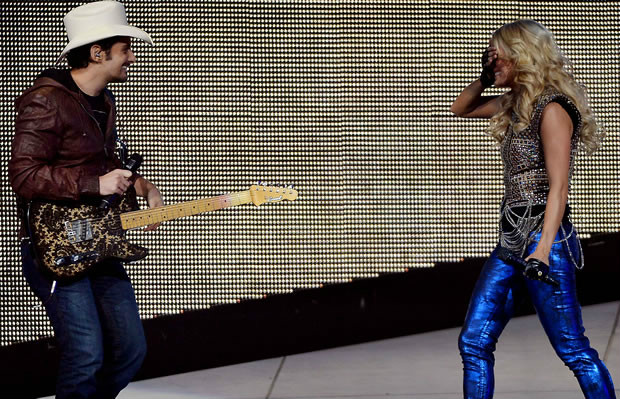 Brad Paisley surprised his dear friend, and fellow country-music star Carrie Underwood during her concert in Nashville as part of the 'Blown Away Tour' on Sunday (September 23)...Watch video below!

If you've been to this tour you know that towards the end of the setlist Carrie sings the #1 Country hit duet with Brad called "Remind Me". And in every show, she displays on a big screen behind her scenes of the actual music video of the song, recreating everytime a kind of 'virtual' duet. However, last night in Nashville instead of a 'virtual' Brad, the real Brad Paisley came onstage! Carrie was SHOCKED, in a good way of course. And according to ABC News there was tears involved, "Carrie actually wiped away tears from her eyes because she was so shocked he was there". Aww! Brad and Carrie then proceeded to slay like never before "Remind Me" live. It was a powerful and emotional rendition. Lucky Nashville-ers!