This Is Why Shakira Is Better Than Your Faves: Protects Fan From Security! 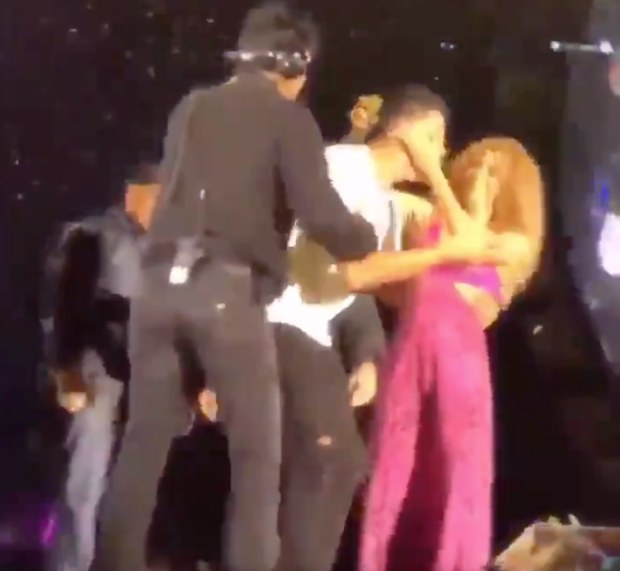 What was supposed to be something scary turned into something beautiful.

At the second and last concert of Shakira’s “El Dorado World Tour” at the Estadio Azteca (80,000 people!) in Mexico City on October 12, an “overexcited” fan jumped on stage to get a hug and selfie from the Colombian pop icon. This happened at the very end of the concert when Shakira was already saying farewell to the crowd after performing the last song of the setlist, “La Bicicleta”. This male fan crashed the stage, ran towards Shakira and proceeded to get his selfie, and Shakira seemed happy to do it. However, Shakira’s security team immediately appeared and violently tried to remove the fan (as any security team would do) but instead of watching her fan being manhandled Shakira went to hug him to protect him from the angry hands of her security team and to give the guards the hint that she wanted the fan to stay on stage to get his selfie (but Shakira took a risky as she was on the verge of getting violently pulled along with the fan and things could’ve gone ugly). The guards got the hint, though, they paused the manhandling, and the fan could calmly took his selfie with Shakira. She then gave the fan another hug and finally the security team did what they were paid to do: to remove any stage-crashers.

Loved this fan-loving gesture from Shakira but after watching this video I thought to myself: “What if other fans would have jumped on stage after seeing Shakira going against her security team and letting that first fan took his selfie?”. You know what I mean? This decision of hers could’ve started a cascade of copycats – but thank God that didn’t happen. Still, this was proof of why Shakira is better than your faves, lol.