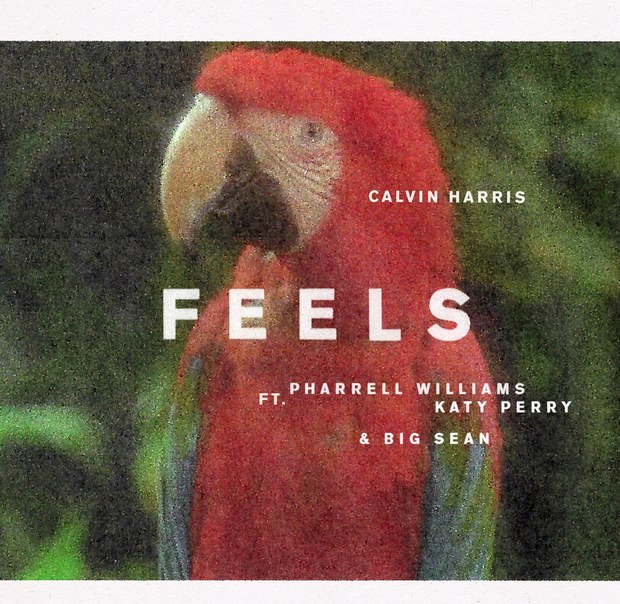 Doesn’t this single have the best artwork ever? That parrot is everything.

Calvin Harris premiered today a new official single from his upcoming album “Funk Wav Bounces Vol. 1”, which will arrive in stores on June 30. “Feels” is the title of the new single and it features vocals from Pharrell, Katy Perry, and Big Sean. Yes, this is the very first time Calvin and Katy work together. Will this be the start of a fruitful musical relationship? I hope so. And I think Katy hopes so too. In view of the awful reviews her latest album “Witness” is receiving, it’s likely that she will need to renovate her usual team of producers for new ones, and Calvin Harris could be a good option.

“Feels” is a feel-good track about romanticism where Katy will sing things like the following on the chorus:

“Don't be afraid to catch feels

I know you ain't afraid about this (hey)

Baby I know you ain't scared to catch feels

Have someone you really like but don’t have the intellect to come up with an engaging “I love you” speech to seduce that person? Worry no more then, just sing to him or her “Feels” by Calvin Harris and you will be good to go.

I know none of the singles so far from “Funk Wav Bounces Vol. 1” have received music video treatments. But could you, dear Calvin, shoot one for “Feels”? Is it about money? Because if it’s about that just ask Katy for it, I’m sure she’ll be happy to pay. She’s going through a bad time at the moment career-wise and getting a massive hit out there with “Feels” would be healing for her I’m sure.