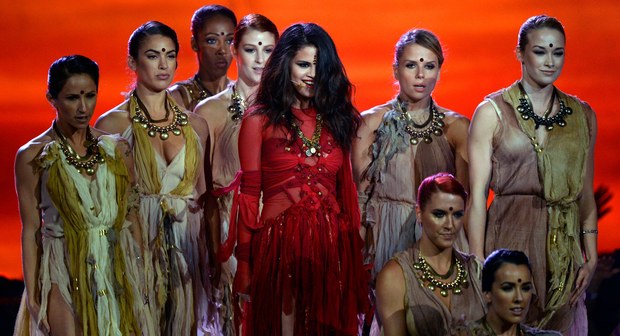 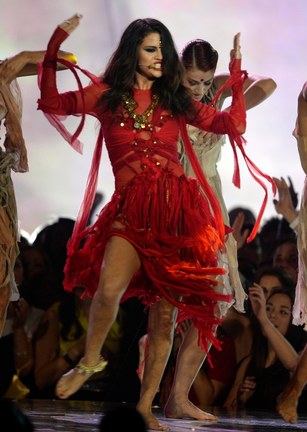 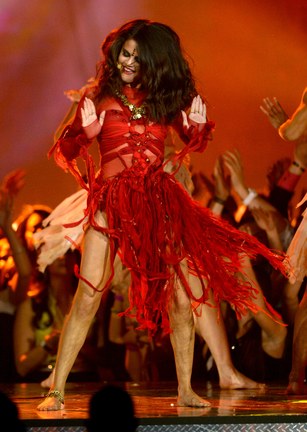 Singing and dancing live is a difficult task for any artist, but for someone with such a fragile voice like Selena Gomez the task becomes doubly difficult. The Disney star delivered the first performance ever of her brand new single "Come and Get It" at the 2013 MTV Movie Awards held at the Sony Pictures Studios in Los Angeles on April 14...Watch below!

Well, that was kind of dreadful! I know Selena tried her best but the outcome was 'messy' any way. The teen singer performed "Come and Get It" strutting through the stage and dancing almost non-stop to an Indian-inspired choregraphy. Her vocals were very shaky, and you could hear her heavy-breathing a lot of the times. The bridge was possibly the most awful part of the performance. In any case, Selena 'tried', and let's just hope she steps it up for her next televised performance. It could be that nerves made her crumble at her MTV Movie Awards gig. My advice?. Pre-recorded 'live' vocals! There are songs Selena can sing live easily, but if she's going to always do an elaborate performance for "Come and Get It", a backing-track is super in need. "Come and Get It" is produced by Stargate, it features a mesmerizing tribal beat, and it serves as the official lead single from Gomez' upcoming fourth studio album, the first without the 'and The Scene' tag.

Did you love or hate the performance?