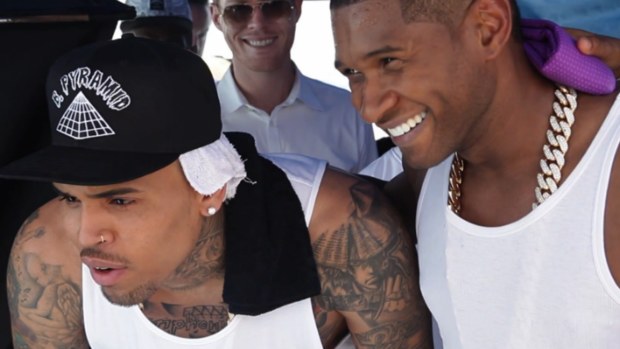 As Usher continues to enjoy the success of his Juicy J-assisted single 'I Don't Mind', a new collaboration between Chris Brown and him entitled 'All Falls Down' has found its way onto the web. Whether or not the smooth tune is an Usher-sanctioned leak is unknown and there's no word on what project the song will be placed on.

If 'All Falls Down' was to have a home, it would likely be on Usher's upcoming eighth studio LP 'UR'. The album is due out sometime later in the year and the 36-year old singer dished out some details in a interview with MTV News a few months back. He told them: "I’m approaching it with empathy and appreciation for everything and everyone that has shown support for me throughout all of these years so I want to make sure that it’s true."

'All Falls Down' is not the first collaboration between Usher and Chris Brown. The two previously linked up for 'New Flame' last year, which was featured on Chris' acclaimed 'X' album. Look for 'UR' to receive a release date in the coming months and stream thew new track below.