Miley Cyrus - You're Gonna Make Me Lonesome When You Go (Music Video!)


Oh yes! It's not new music, but the uber-talented Miley Cyrus is back on business! Leaving aside my ineluctable frustration over the commercial flop of the underrated "Can't Be Tamed" album, I'm happy to announce to all Miley fans out there, that if the MP3 leak of her Bob Dylan cover of the 1975 classic "You're Gonna Make Me Lonesome When You Go" whetted your appetite last December, here's now the 'official' music video for your viewing pleasure. Check it out!!

Miley's cover is part of the Bob Dylan compilation 'Chimes of Freedom: The Songs of Bob Dylan Honoring 50 Years of Amnesty International', a four-disc collection which honors Amnesty International's 50th anniversary and pays tribute to Bob Dylan's career at the same time. The album contains 76 newly recorded cover versions of songs by Dylan, contributed by more than 80 artists. BTW, I think Miley did justice to 'You're Gonna Make Me Lonesome When You Go'. She made the song her own. It sounds like a country tune, it's nice and mellow, and evidently this type of music suits Miley's voice amazingly. As for the recently-premiered MV, it's all about the song's sentiment. In it you'll see Miley performing the Bob Dylan song at an empty house with the help of guitarist Johnzo West.

What do YOU think of the music video/song? 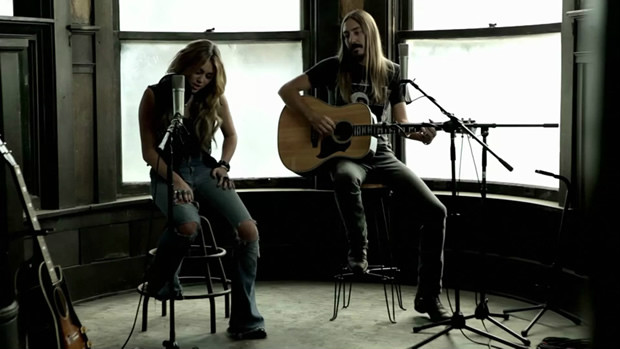