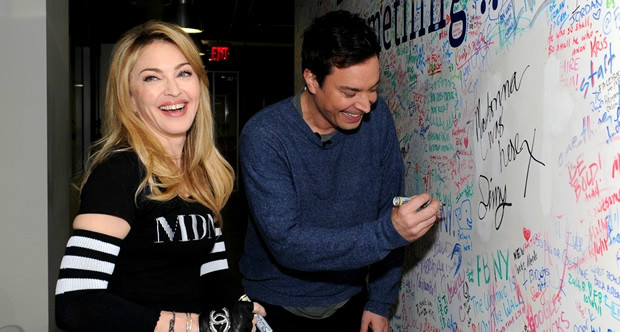 Queen of pop Madonna sat down with late night host Jimmy Fallon for an exclusive Facebook-sponsored interview last night (March 25th)in one of the few promotional efforts Madge is doing before the big release of her new album "MDNA" on Monday...Watch below!. It was almost 25 minutes of chat where Jimmy asked some questions, but also let Madonna's fans - connected to the live stream via a link posted on Madge's official Facebook - participate in the questionnaire. As you'll see, Madonna was very Madonna, answering questions in her very own 'way', and mostly talked about 'MDNA', the songs in it, the upcoming tour, lack of real promotion, sales, etc etc. *love her bitchy laugh though!*.

Just few a hours after concluding the Jimmy Fallon interview, Madonna surprised Miami's Ultra Music Festival attendees by crashing the stage during DJ Avicii's set to 'play' (and debut at the same time) with him a new remix to her latest single "Girl Gone Wild". Madge looked fierce, but I'm not so sure I'm loving the remix. And she should've sung live a bit! or at least acted as hype man with the mic.