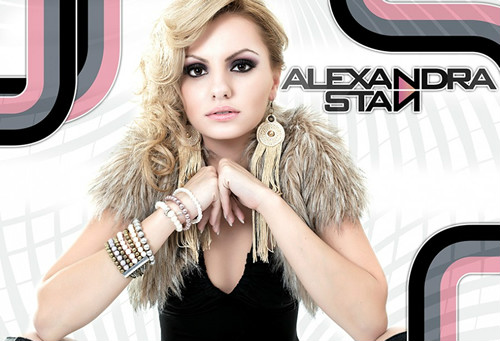 Her name is Alexandra Stan and she's the latest up-and-coming talent to come out from Romania's, increasingly popular, DANCE music scene - After Inna and Elena Gheorghe's success, Alexandra Stan, with the help of the local MAAN STUDIO production team, has quickly risen to become one of the most successful European artists of the last year.

Alexandra's big break came with the ultra catchy single "Mr Saxobeat", released in late 2010, first in Alex's home country of Romania, where it broke some chart records, and later it spread over the rest of Europe luring everyone that heard it with its infectious beat. "Mr Saxobeat" hit the #1 spot in several countries including; Germany, Italy, Spain, Switzerland, Sweden, Dermark and Austria. With these markets conquered, the next big step on Stan's career was to crack the very competitive UK market. And so she did! "Mr Saxobeat" was officially released there this April and it managed to get within the Top 5, making Alexandra Stan the first Romanian female artist to achieve such feat. And if you think such massive success would overwhelm anyone, you better get ready, cause if you're still planning to jam "Mr Saxobeat" in your parties this summer, you should know Alexandra has a new summer smash under her sleeve, a new single called "Get Back (ASAP)". Similar in sound to "Mr Saxobeat", will this formula work again?

Thanks to her management team, we recently got the chance to interview Alexandra. Unfortunately, the 22-year-old pop star didn't feel like answering much in depth as you'll see. However, she did share some info with us in the end, like saying the album would be executive produced by MAAN Studio - so expect loads of dancefloor tunes there, she confirmed her debut album will be released in September, and even dared to say electro-pop/dance music will dominate the music industry from now on. Read this and more below.

1. Hi Alexandra, thanks for taking the time to do this interview.
First of all, let us know what is up with you at the moment? Doing promotion I'm sure!
My pleasure. I am on tour promoting my new single “Get Back (ASAP)” .

2. Most of us know you from your super catchy single "Mr. Saxobeat". Were you expecting the song to become such a hit internationally? It got to number one in seven countries!
Wow…Frankly, I didn’t expect “Mr. Saxobeat” to be so successfull. It’s an amazing feeling, almost surreal. For that I thank all my fans.

3. Is there a story behind "Mr. Saxobeat"? Perhaps, a real life mister?
All my songs are part of my life and they are telling a different story.

4. How important is for you to have become the first Romanian female singer to chart a single ("Mr. Saxobeat") within the Top 5 in such a competitive market like the United Kingdom? Also, is there any important promotion scheduled for the UK soon? (TV performances-wise).
Sometimes I still can’t believe it! I am proud that my music is so appreciated and that encourages me to move on. Last month I was in the UK for promotion and for the moment I am on tour in Europe to promote my new single “Get Back (ASAP)”. It would be a great pleasure to come again to the UK so...See you soon England!

5. “Mr Saxobeat” is also doing well in the ‘club’ scene in the US. Do you have in your plans a visit to America in a near future?
Why not? I’m very glad that my music has no borders.

6. It feels like this 'saxo beat' has become your signature sound, as your next single "Get Back (ASAP)" also has that influence in style. Is it just a coincidence, or are these songs indicative of what your debut album will be like?
Indeed the new single “Get Back (ASAP)” follow up to “Mr. Saxobeat”. The album will be very diversified and I’ll approach many genres.

7. Speaking of your debut album, you said we'll be getting it 'very soon'. Tells us a bit about the album, the recording process, what producers helped you, if you have any favorite songs already, will there be many uptempos?
In September I will release my first album. The time spend recording with my producers from MAAN STUDIO is was the best time of my life. I really enjoyed working with them and I had a lot of fun. I don’t have a favourite song because all the songs are part of my life and they represent me.

9. Let's talk now about other things.
What singers have influenced Alexandra Stan and why?
Over time there were many artists who impressed me both by their voice or by their attitude. Every time I tried to learn something from them.

10. What's playing on your iPod right now?
My album, of course.

11. What are your thoughts on dance/electro-pop music dominating the music industry right now? Do you think it's a just trend or is it here to stay?
The dance music is not a trend, it has a long history and I think it will dominate the music industry long time from now.

12. If you could choose one artist to collaborate with, who would it be?
I admire many artists , that’s way is very difficult to pick just one. It would be an interesting experience for me to collaborate with an international artist.

13. That's it, Alexandra. Thanks for the interview. Any last thing you want to share with our readers?
I’ll try to do my best to give my fans nothing but good music