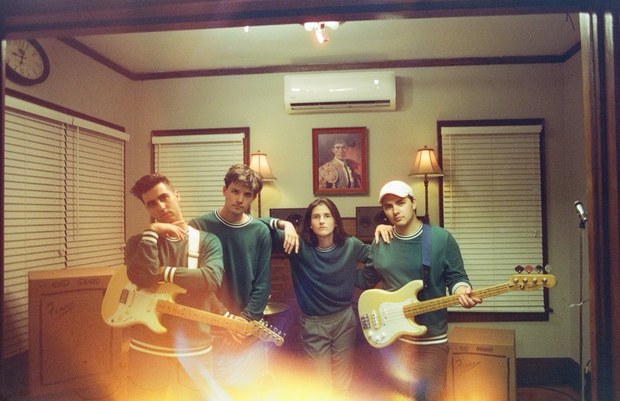 Check out now an exclusive interview we did with Toronto-based indie-pop band Valley a few days ago. Valley are signed to Universal Music Canada, they have released their debut album in 2016, a new project is coming later in 2018, and the new single they are currently promoting is called “Closer to the Picture”, a laid-back indie bop that's been described as “an anthem for all outcasts”. And by the way this description fits like a glove to the treatment of the song’s music video that premiered today on YouTube. Watch it below (and get your first listen of the song if you hadn't heard it before!).

And as for our interview with Valley (we chatted with 1/4 Rob Laska), read it right below! You’ll get to learn a little more about the band's story, they'll talk about their new single, what bands inspire them, among other things.

If you're into indie rock/pop, get into Valley ASAP!

1. Hi there! Where are you answering this Q&A from and how has your day been like so far?

Hey hey! Currently at my place, its 10 am and about to make some pancakes. Days off are great!

2. Tell us a little bit about how your interest for music first started and how the four of you came together as a band.

Music played a huge role for all of us growing up. I think naturally we all individually gravitated towards an instrument, lessons, joining school band. That then quickly shifted into starting our own highcool bands, playing around town. The way us four met, we actually got double booked at a studio. Alex and myself were recording some music, Karah and Mike had a project. We both were super into eachothers music and decided to join forces!

3. How exactly did you choose your signature sound/style of music? Was it something natural among all four members? Would you be open to exploring different sounds in the future?

Most definitely. With Valley in particular, we pull influence from so much music and everyday life that it's never really an equal balance of one thing. I think every song we work on comes from a backbone of growing up on motown records, fleetwood mac (our parents record collection) ect. but mixed in with early 2000s pop music and also our love for artists like The 1975, Death Cab for Cutie, Sigrid, Oh Wonder, Coldplay and so on. It's never really one sound we’ve ever had in mind for the band and I think that's super prominent on our upcoming debut record. There’s a lot of familiar concepts running through lots of the songs, but sonically they cover a lot of different landscapes which we are really proud of.

4. How did you come up with your band name, VALLEY?

We were looking for a simple one word letter name with some symmetry to it. After lots of trial and error, Valley just had this look on paper with the two L’s that we could then flip and manipulate. Really into the visual aesthetic of the word!

5. You recently released a brand new single called “Closer to the Picture. You described the song as “an anthem for outcasts”. Could you further elaborate on what inspired the song and the recording process? Also, we loved the contrast of talking about deep stuff but having such a cheerful-sounding chorus!

Thank you so much! Appreciate that. Closer to the Picture was written about halfway into the writing process of the record. We decided to do a writing trip to Brooklyn NY. Near the end of our trip, we got together with Andy Seltzer who’s previously worked with Maggie Rogers, Penguin Prison ect. We wrote the bulk of the song that day in NY and finished it nearly the next morning at our airbnb to show Andy over coffee haha! He ended up producing the record with us!! With Closer to the Picture, we wanted to just simply write about a feeling we’ve all had to deal with in any form of social situation and then pair it with a sonic palette that has the exact opposite expression- slick audio samples, wide chorusy guitars, quirky vocals- a sonic mask that the outcast hides behind.

6. Have you shot a music video for “Closer to the Picture”? If so, what can we expect from the treatment?

We have! We are super stoked to get it out. We actually worked on the treatment alongside some of our best friends who we’ve worked with before on our Slacks video. We wanted to make the video fairly quirky and explore lots of different personality traits that would exist at a party. From the extra terrestrial to the token drunk to the chatterbox. We presented all these characters through the lens that we often experience in real life when we have to socially float through parties, trying to find the dog haha

The Closer to the Picture video is also interconnected with other videos but can’t talk about that just yet!!

7. You are signed to Universal Music Canada. What was your signing process like and how do you feel to be part of a great label like Universal and sort of very early in your career!

We feel so so grateful to be on Universal. They’ve shown a lot of support from the early days of playing shows in Toronto and everything coming together this year was super exciting for our entire team. We were signed for the music we make and put out in the world, and now we're putting out an album?! So lots to to be thankful for. It’s quite a special thing to be doing these days so we’re forever grateful for their belief in our vision with Valley.

8. What are some bands whose careers you aspire to have one day?

I think we’ve definitely kept an eye on artists that really took their time with their careers and built their team, their vision brick by brick. Artists that also evolve and continue to put 100% into everything they put out from socials to videos to photos to music are really important to us. It's really inspiring to follow artists that have such a defined idea of what they know they want to be and chase it and build a great team around them that help them get there. Artists like the 1975, Oh Wonder, Lorde, LANY, Jack Antonoff- their stories inspire us.

9. What’s one song from one of those bands you wish you had written and recorded yourselves? And what’s so special about that song?

I think there's SO MANY. I think as a band we could all agree on Somebody Else by The 1975. There's just something about the chord progression in that song and the way the vocals move that tears you apart. Its going back to that happy/sad feeling you talked about earlier. When a song about heartbreak can evoke dance moves? That's a beautiful contrast and feeling.

Loud, upbeat! It's all about building community and inclusiveness around the band too. We want fans and new fans and every person in the room to enjoy the show, get a drink, make new friends, build community and come back to another show. It means so much to us that people are paying their hard earned money to see us play our songs live?! So we are always forever thankful.

11. Thank you so much for your time! Any last thing you would like to tell our Direct Lyrics readers?

yo Valley boyz | closer to the video ???? pic.twitter.com/8pAUQzIQDs