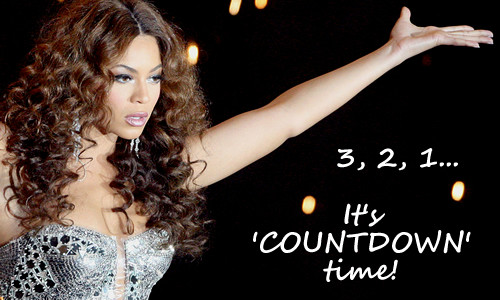 Contrary to early reports, neither "1+1" nor "End of Time" will be the follow-up single to "Best Thing I Never Had", instead the urban smash "Countdown" has been announced as THE chosen one. With lyrics such as "Grind up on it, girl, show him how you ride it", the The Dream and Ester Dean co-written record will officially become the third single from the '4' album. Fingers crossed "Countdown" becomes the first uptempo hit from this new era, Beyonce didn't have luck with "Run The World", did have it with the ballad "BTINH", so much hope will be put on "Countdown"...let's see if this turns into a summer smash. Complex.com broke the news this morning confirming Queen B is readying a videoshoot for "Countdown" and that she has hired Adria Petty ("Sweet Dreams") to sit on the director's chair.

*UPDATE* Beyonce Shoots Video For 'Party' Too! Below on New Jersey Set!

In other news, watch below a new Beyonce commercial for L'Oreal Paris. B looks graceful but her script is so LOL. The things she has to do to win a couple more millions.