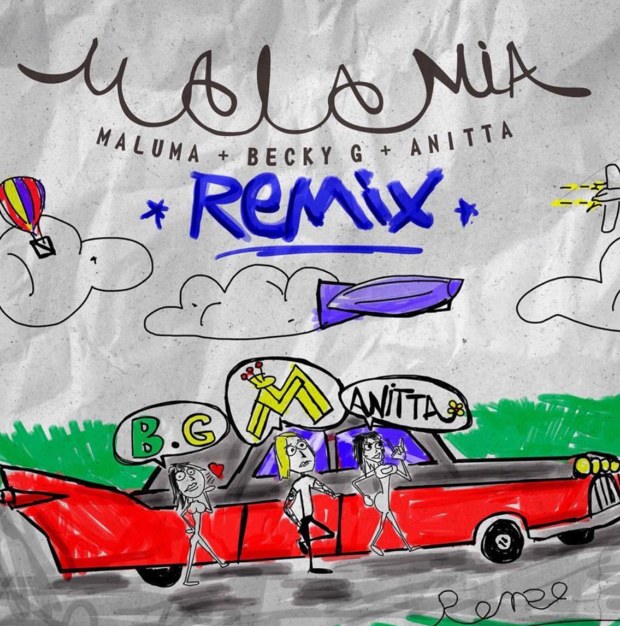 Colombian singer Maluma hasn't had enough of Mala Mia just yet. The hit summer song, which entered the Top 10 in several Latin American countries, Spain and even reached #1 on the Latin Songs Chart on Billboard in the U.S, is enjoying, as of last weekend, an extended life period. Why? Because Maluma dropped a Mala Mia remix featuring Becky G and Anitta last Friday. So I guess we will be hearing Mala Mia whether we like it or not playing at Latin clubs at least for a few more months. But it's a clever move anyway. Summer is just starting in South America and that means more parties and DJs needing new music to fill their playlists, and this Mala Mia will come in very handy for them.

But... Is the remix good? Yes, it's good. But that I already knew before listening to it over weekend. My girls Becky G and Anitta are featured in this remix and they're just killing it at everything they do at this moment and of course they were going to slay her parts in the Mala Mia remix and add a revamped energy to this Maluma song. Only thing I would have wanted, though, was for Anitta to have given us a few Portuguese lyrics but IT'S OKAY! I understand she singing it all in Spanish to promote her Spanish music career. In the end, that's the language Anitta has to focus on if she wants to build a bigger fanbase outside Brazil.

But Anitta compensates the lack of Portuguese in this remix with something else, something much more important actually. In her lyrics, the Brazilian queen calls out sexism. She basically hopes that one day soon women will be able to enjoy her sexuality however they choose to without being denigrated or being called the W-word.

What I love the most about this gesture in favor of the feminist movement from Anitta is that she did it on a Maluma song. From all the reggaeton stars out there, Maluma is the one with greatest number of misogynistic songs. And he's actually been called out about this in the past multiple times. He has decreased his level of sexism in his latest releases but unfortunately he hasn't been cured of this DISEASE just yet. For instance, take a look at the Mala Mia original cover art.

I'm sure feminist activist Anita knew about his Maluma controversy. That's what I want to believe before agreeing to record this remix. And that she agreed only with the intention of including these lyrics about women empowerment in Mala Mia, the remix. Maluma needed to be educated and my Brazilian goddess just served him some quality education. I honestly find it GLORIOUS hearing lyrics like "Anda pa'l carajo, deja el machismo" in a MALUMA song. Anitta is a BOSS!!!!